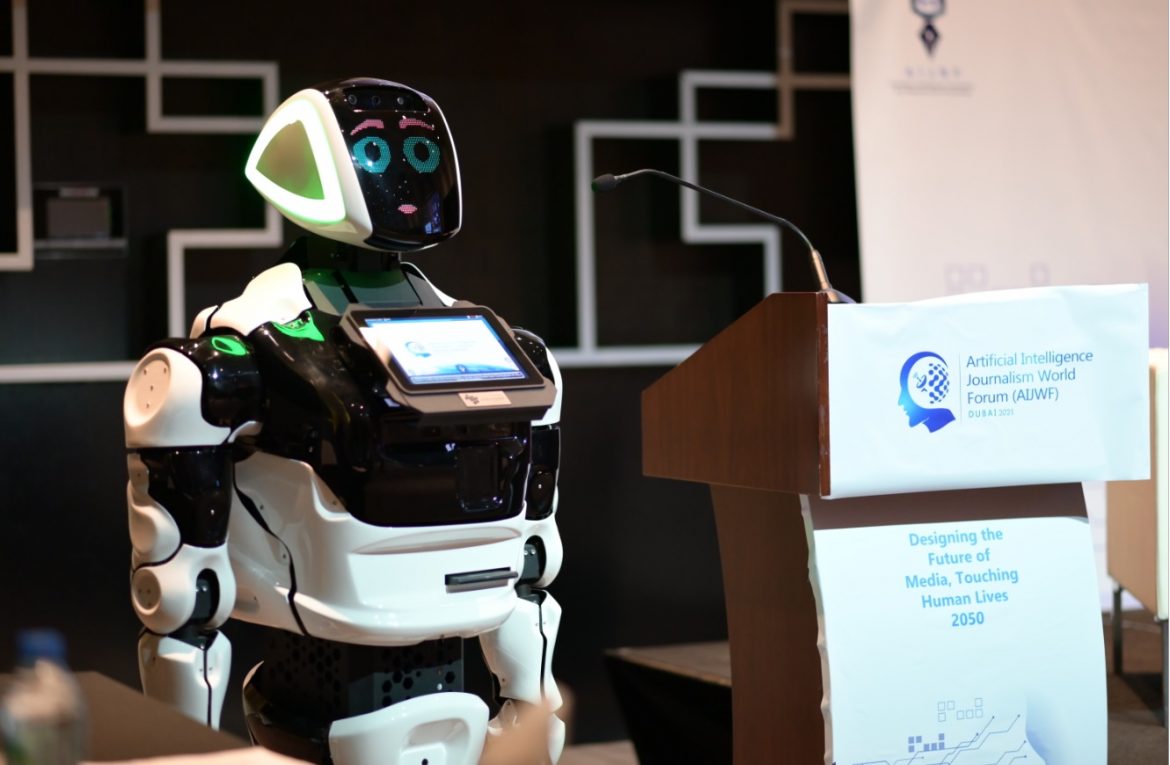 The Forum lasted over two days, and witnessed 8 discussion sessions, 2 in Arabic and 6 in English, with the participation of more than 50 researchers and academics representing a diversified number of universities from: the United States, Britain, Australia, France, Germany, Spain, New Zealand, South Africa, India, the United Arab Emirates, Bahrain, Saudi Arabia, Egypt, Algeria, Jordan and Iraq.

Prof. Mohammed Abdulzaher, a pioneer in Artificial Intelligence Journalism and one of the founders of the Artificial Intelligence Journalism World Forum (AIJWF), says, “The idea of the forum emerged since the end of 2019, and it was planned to launch in February 2020. The idea inspired like a dream with a work team that believes in the ability to visualize the future and to work harder to create new tools and technologies that contribute to making great changes in the media industry, primarily aimed at serving Arab media and the Arabic language.

Prof. Abdulzaher added, “We started building relationships with the media, studying their actual needs, then proceeded to communicate with the manufacturers of AI technologies, and engaged many experts into the institution in order to support ideas and to test the tools applicable, for the benefit of the media. It has been unanimously agreed that we shall bring together all the major players under a single platform in the same place, i.e. the Artificial Intelligence Journalism World Forum”.

Prof. Mohammed Abdulzaher pointed out that the work environment in the UAE has strongly enabled the Artificial Intelligence Journalism Foundation to flexibly and rapidly communicate and establish relationships and networks with all actors, and opened the door to work alongside many manufacturers of AI technologies around the world. Prof. Abdulzaher affirmed, “After more than 9 months of preparing for the forum, we have been able to connect academics, media and innovators all under one platform. All the team participated strongly and enthusiastically to explore the future of media 2050.

During its sessions, the Forum discussed many different ideas and visions, as the first session highlighted the importance of enhancing intelligence techniques in AI Journalism in the Arab media, and explored the 7G Journalism, based on what was discussed in the first scientific session of the forum under the title “AI Journalism and 7G Journalism, and the future of the media industry 2050”. The first session was moderated by the media expert, Mayssoun Azzam, Presenter of Arabiya News Channel, with the participation of Professor Mohammed Shouman, Chairman of the Conference, Prof. Mohammed Abdulzaher, Dr. Abbas Alzanjne, a researcher at Virginia Tech University, and Dr. Samer Obeidat, General Manager of Stanley AI Technologies, Canada.

The second session addressed: Leveraging of Artificial Technologies into the Arab media (Arabic), which was moderated by Naoufer Ramoul, of Dubai Media Incorporated, and was attended by the journalist Mohamed Hannach of Arabiya News Channel, Dr. Hosni Ghedira of Mohamed Bin Zayed University of Artificial Intelligence, and Mr. Ahmed Elshiekh, a media expert and former journalist of the British Broadcasting Corporation.

Prof. Abdulzaher stressed that the drafting of a Code of Ethics for Artificial Intelligence Journalism, must consider ethical controls for 6 different components, namely: The audience, the media, the communicator, the manufacturers of AI technologies, the governments that control the work of all these tools.

The fifth session discussed a theme on “Urban Artificial Intelligence, sustainable cities and the infrastructure for smart media”, moderated by Prof. Ibrahim Aljarah, Professor of Artificial Intelligence at the University of Jordan, with the participation of the Prof. Carey Keynes, Professor of Sustainable Energy (United States), and Mrs. Ouided Bouchamaoui, winner of Nobel Peace Prize in 2015 and Dr. Sherif Fahmy, Director of Innovation Department at the British Pfizer Company.

The seventh session:Future Leadership – The Ability To Lead Through Disruption, discussed the nature of the skills prerequisite for future leaderships. The session was moderated by Sona Nambiar, the former journalist of Thomson Reuters, with the participation of Mr. Ghanim Al Falasi, Senior Vice President of the Dubai Silicon Oasis Authority and Prof. Dahlia Mahmoud, Dean of College of Media and Mass Communication, the American University in the UAE, And Dr. Anwaar Al Shimmari, the former Chief Innovation Officer at the UAE Ministry of Infrastructure Development and the British Speaker and Leadership Coach Mindy Gibbins.

First: Person of the Year Award: This prize is awarded this year to the Scientist of Artificial Intelligence and Sustainable Energy, Prof. Carey Keynes.

Third: The Best Media Organization Award: This prize is awarded this year to Bloomberg Foundation for adopting advanced artificial intelligence technologies during its service of Bloomberg Terminal. The remaining three categories of the award were withheld due to the lack of conditions required by the committee in the submitted works.

The Forum Shield was also presented in honor of the work team and the participants in the preparation of the Artificial Intelligence Journalism World Forum over the past months.

Fourth: AI Techniques and the Manpower

Expanding digital transformation initiatives and the use of AI techniques in various fields, particularly in the field of realizing sustainable development.

Artificial Intelligence Journalism World Forum will be launched in Dubai

Globalization 4.0: The Future of Media in the Age of 7G Journalism