Globalization 4.0: The Future of Media in the Age of 7G Journalism 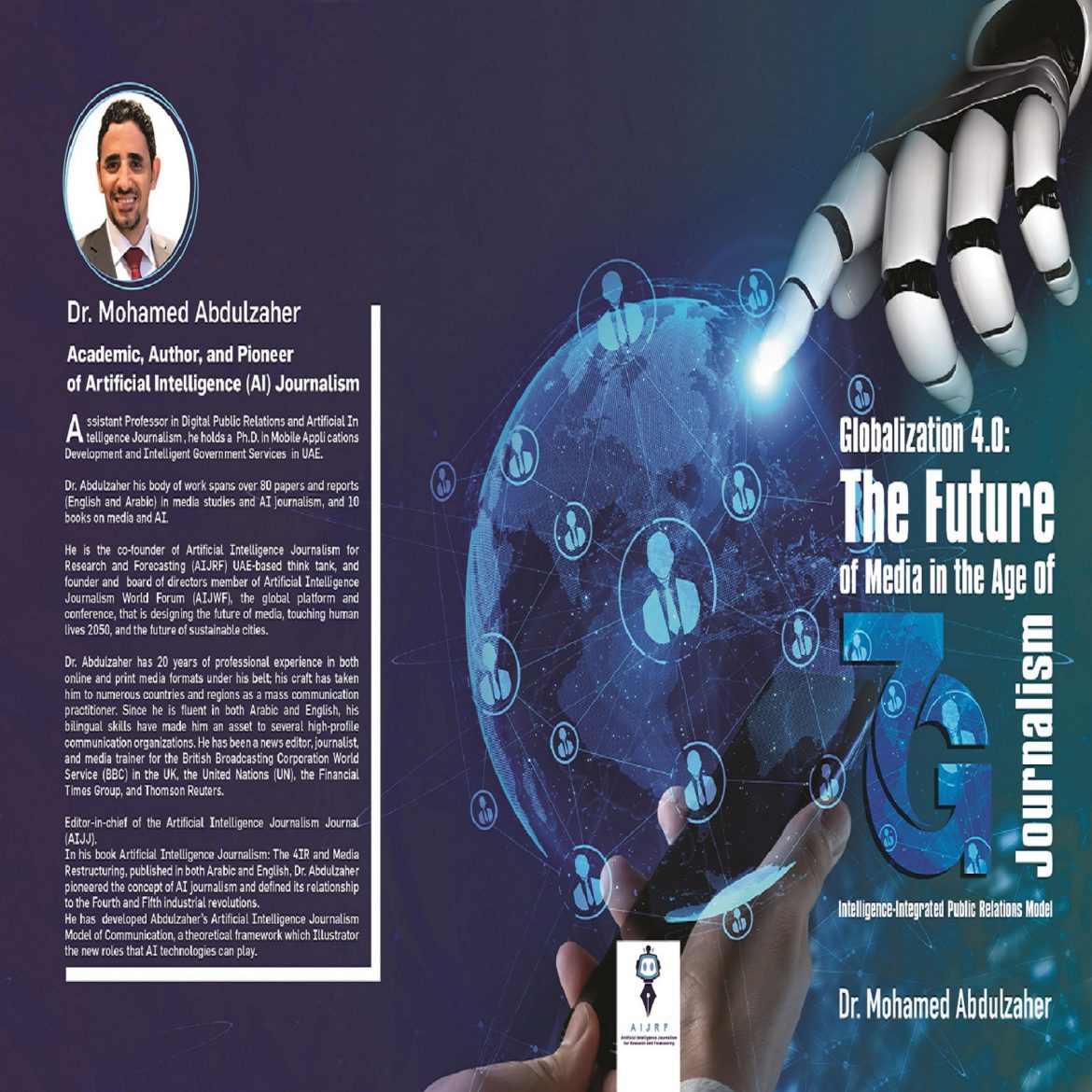 “The Globalization 4.0: The Future of Media in the Age of 7G Journalism book includes a set of forward-looking thoughts  to forecast the future of media and technology in the post-Covid-19 period, in which I tried to review the most prominent global trends in studying the future of the Media and Entertainment industry. I have presented a new model to upgrade the traditional public relations industry to Integrated-Intelligence public relations, which totally relies on the Fourth Industrial Revolution technologies, and will lead to the decline of traditional public relations completely.” Dr. Mohamed Abdulzaher, the book’s author said.

Abdulzaher added that: , “The book also reviews the previous concept that I have coined  ‘7G Journalism’ and the concept of Robotisation of Marketing, in addition to the future of technologies and solutions in the post-Covid-19,  and the future of the Dynamic Human Skills (DHS) compatible with the Fourth and Fifth industrial Revolutions.”

The author has reviewed many of the new terms in media industry including: Artificial Intelligence Journalism (AI Journalism)  concept and the media industry with the Fourth Industrial Revolution technologies.

• Intelligence-Integrated Public Relations (IIPR) concept , which is the post-Digital Public Relations stage.
• Robotisation of Marketing (RM) concept , which is completely reliant on the technologies of the Fourth Industrial Revolution in the marketing industry.
• Seventh Generation Journalism (7G Journalism) – which is the shape of the media industry with the Fifth Industrial Revolution.
• Abdulzaher Artificial Intelligence Journalism Model of Communication, which is the new global model in the methodological and academic framework of media studies in the era of Artificial Intelligence Journalism.
• Dynamic Human Skills (DHS) concept, which refers to the ability to work flexibility in different future sectors and jobs related to the Fourth Industrial Revolution, with new skills that are compatible with, and also the ability of the workers, professionals and companies to diversify their skills and management in their careers, according to work requirements and any crisis or changes that the world, a country or a sector may go through.
• The Trumpian phenomenon in managing media and public relations campaigns globally, in reference to the way former U.S President Donald Trump managed social media and created a new model in managing public relations and global diplomacy.

Dr. Abdulzaher links between the great technological progress offered by the new globalization and the emergence of Artificial Intelligence Journalism, and how Globalization 4.0 can push to the era of “7G  Journalism” in the thirties of the current century.

While in the second chapter, the author shows the future of Artificial Intelligence Journalism, and how the media can be shaped until the year 2030, and also talks about  the “Dynamic Skills”, and how human skills can be developed and compatible with the technologies and tools provided by the Fourth Industrial Revolution and Artificial intelligence Journalism.

In Globalization 4.0: The Future of Media in the Age of 7G Journalism book in Chapter III, Abdulzaher has defined seven features of the 7G Journalism Concept, which they are:

1 – 7G Journalism has the Capability of Forecasting News.
2- 7G Journalism Relies on the Technologies of the 7G Networks.
3- Sender will be Non-existent in the 7G Journalism era.
4- 7G Journalism Will Strengthen Anonymous Media. Organizations to Play a Significant Role Globally.
5- Media and Entertainment Industry Will be Managed by Huge Technological Empires.
6-  A huge Gap Between Media Outlets Globally.
7- Major Breaches of Public and Community Privacies.

The author has coined a new model for public relations industry in Chapter 4, which is showing different stages of PR, from the  Traditional Public Relations stage, then the Electronic PR, then the Digital PR, and finally to the smarter interactive PR, which he calls :“ Intelligence-Integrated Public Relations Model (IIPR), which is completely relying on the technologies of the 4IR and Robotisation of Marketing tools to reach to the target audiences.

​Abdulzaher has defined the IIPR term  in the Globalization 4.0: The Future of Media in the Age of 7G Journalism book as:​ ​” A new form of public relations, more sophisticated and intelligent  than the Traditional, Electronic, Digital forms, where the public relations function depends on the tools and technologies of the Fourth Industrial Revolution in content creation, the predetermination of the target audience, where the audience is mainly listed in the contact person’s databases, whether the existing by a human , a machine, or an artificial intelligence technology​.​”

IIPR has 10 new features will shape the future of the media industry as the following:

The author has described 10 features define why Robotisation of Marketing is surpassing the Digital Marketing, as the following:

1- Strong Efficacy of Advance Planning for Media or Marketing Campaigns

2- The Volume of the Available Data and Information to Marketers about Product, Services, and Target Audience.

3- Speed ​​in Reaching the Target Audience

6-   Flexibility in Communicating with the Public

7-  Availability of Prior Results

10- Comprehensive Evaluation of All Marketing Tools, Solutions and Offering Suggestions.

In the Sixth Chapter, the author has explained “Abdulzaher Artificial Intelligence Journalism Model of Communication,” which is the first global model published by the author​, ​as a theoretical framework on artificial intelligence journalism studies and methodological frameworks in this field.
Finally, in Chapter Seven, the author reviews the future of the world’s technology in the post-Covid-19 era, and the world’s new technologies and solutions that will be critical in Post-Coronavirus .

Dr. Mohamed Abdulzaher , an academic, author, and pioneer of Artificial Intelligence (AI) journalism. He is assistant professor in Digital Public Relations and Artificial Intelligence Journalism ,  and holds a  Ph.D. in Mobile Applications Development and Intelligent Government Services  in UAE.
Dr. Abdulzaher his body of work spans over 80 books, papers and reports (English and Arabic) in media studies and AI journalism.
He is the co-founder of Artificial Intelligence Journalism for Research and Forecasting (AIJRF) UAE-based think tank, and founder and  board of directors member of Artificial Intelligence Journalism World Forum (AIJWF), the global platform and conference, that is designing the future of media, touching human lives 2050, and the future of sustainable cities.
Dr. Abdulzaher has 20 years of professional experience in both online and print media formats under his belt; his craft has taken him to numerous countries and regions as a mass communication practitioner. Since he is fluent in both Arabic and English, his bilingual skills have made him an asset to several high-profile communication organizations. He has been a news editor, journalist, and media trainer for the British Broadcasting Corporation World Service (BBC) in the UK, the United Nations (UN), the Financial Times Group, and Thomson Reuters.

Amazon to invest $10 billion in Space-Based...