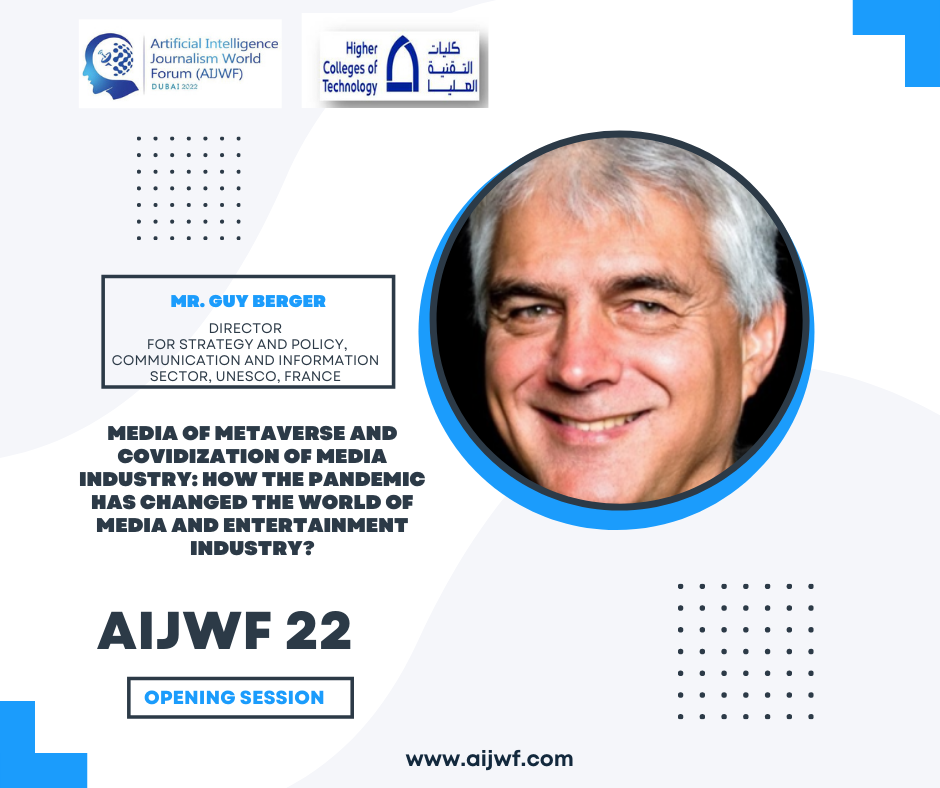 Mr Guy Berger, Director for Strategy and Policy, Communication and Information Sector, at UNESCO will participate in the opening session of the AIJWF. The session will focus on the most prominent global changes in media industry during the post-Covid era, and the future of the media and entertainment industry during the next decade.

AIJWF will be held this year at the Higher Colleges of Technology, the largest applied institution of higher education in the UAE, on March 14, under the title: “Covidization of Media Industry to Media of Metaverse and the 7G Journalism Technologies, the Most Significant Changes in Media and Entertainment 2030”.

Guy Berger is the Director of Strategy and Policy, Communications, Information and Media Development at UNESCO. He is responsible for the organization’s global work on press freedom, safety of journalists, Internet freedom, media pluralism… Before joining UNESCO, he headed the School of Journalism and Media Studies at Rhodes University, Grahamstown, South Africa. In addition, he worked in both press and television and has a long column for The Mail & Guardian website.

Besides this, Guy Berger served as the Vice President of the South African National Liberation Forum. He holds a Doctor of Philosophy from Rhodes University and has authored numerous books and won many awards.

AIJWF is the first global annual event, where it brings together academics, media professionals and educational institutions to forecast the 4IR and 5IR technologies.

It is the world’s leading platform in designing the future of media and touching human lives 2050. AIJWF seeks to explore the era of Artificial Intelligence Journalism, Media of Metaverse, 7G journalism. It presents real experiences for international media in the use of AI technologies in editing and writing processes, data analysis, detection of fake news, use of 3D printing, big data analysis, data journalism, and other technologies of 4IR related to media.

AIJWF’s first edition was in March 2021. It was headed by Professor Farouk El-Baz, the Egyptian American space scientist and geologist, with the participation of more than 50 universities, think tanks and more than 200 researchers and journalists from 20 countries.