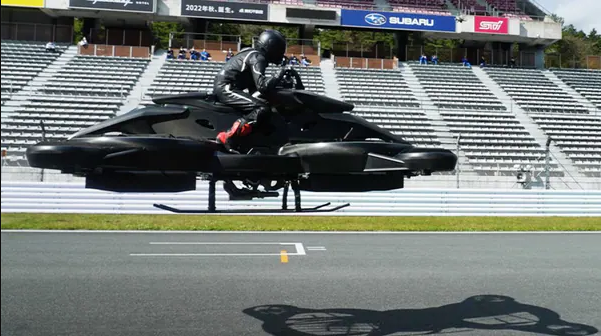 When I came to write this, I automatically took years back to my childhood days. When I used to watch cartoons where flying cars and bikes exist. Nowadays imagination becomes reality, with the XTURISMO Limited Edition Flying Bike.

You may have seen flying cars in action in real life, or in videos. But Japan witnessed a flying bike whooshing past them, or hovering mid-air during a demonstration this week.

On Wednesday, ALI Technologies put its flying bike, the X-Turismo Limited Edition, up for sale in Japan. It is a bicycle that can fly for 40 minutes at a speed of up to 100 km / h on a single electric charge.

The Japanese startup is hoping to make a leap into the transportation sector and convince car owners to abandon it and replace it with a $680,000 Hoverbike. The company aims to manufacture 200 Hoverbikes (300 kg) by mid-2022. The flying bike stands 3.7 metres in length, 2.4 metres wide and 1.5 metres in height. It can only seat a pilot for now.

During the demonstration, which was held on Tuesday, the XTURISMO Limited Edition flying bike was seen floating in the air with a roaring sound in front of the grandstand at the Fuji racing track. It was also seen slowly swirling in the air while drawing a figure of eight.

Daisuke Katano, President and CEO of ALI Technologies, said, “We started developing hoverbikes in 2017. It is expected that air mobility will expand in the future. But first of all, in circuits, mountainous areas, at sea, and in times of disaster. I am happy to introduce it as the first step of the XTURISMO that is being done and as one of the new lifestyles.

Artificial Intelligence: Autonomous boats could be your...

The US military is trialing augmented reality...