Elon Musk unveils pig with chip in its brain 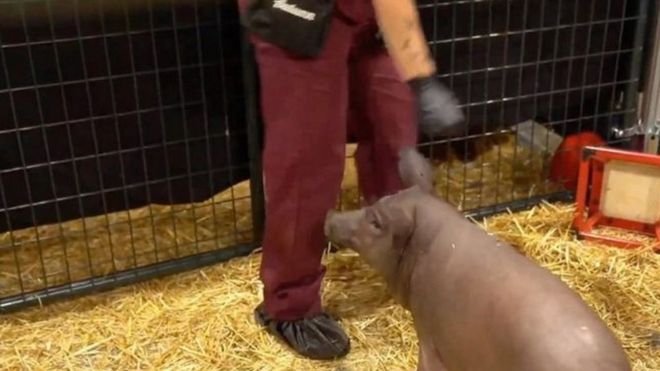 The billionaire entrepreneur said on webcast .”It’s kind of like a Fitbit in your skull with tiny wires,

Gertrude was one of three pigs in pens that took part in Friday’s webcast demo. She took a while to get going, but when she ate and sniffed straw, the activity showed up on a graph tracking her neural activity. She then mostly ignored all the attention around her.

The processor in her brain sends wireless signals, indicating neural activity in her snout when looking for food.

According the report Mr Musk said that the original Neuralink device, revealed just over a year ago, had been simplified and made smaller.

“It actually fits quite nicely in your skull. It could be under your hair and you wouldn’t know.”

The device the company is developing consists of a tiny probe containing more than 3,000 electrodes attached to flexible threads thinner than a human hair, which can monitor the activity of 1,000 brain neurons.

He argues such chips could eventually be used to help cure conditions such as dementia, Parkinson’s disease and spinal cord injuries.

Internet of Bodies and the Future of Merging Man and Machines

COVID-19: Winners and Losers in Technology and...