Does Artificial Intelligence Detect Fake News or Create it? 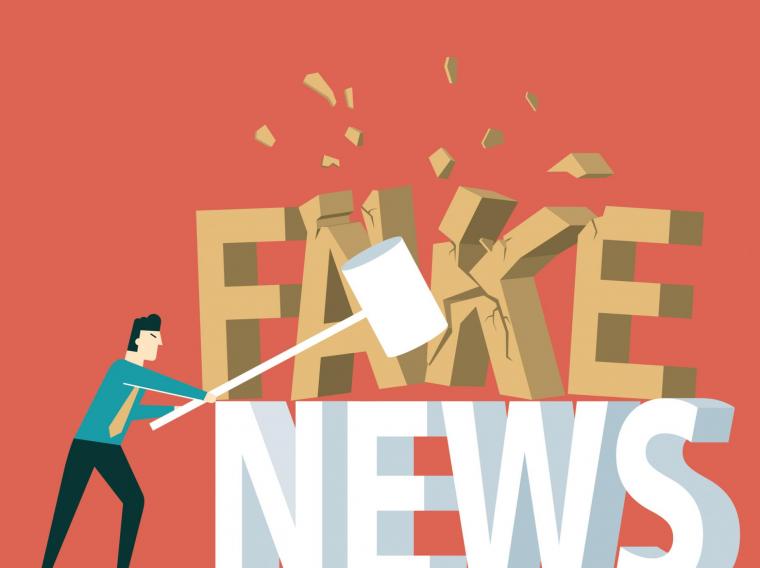 You must have definitely heard during this year news calling you to boycott the vaccine because it changes the person’s genetics. Or you may have read the news about the arrest of the president of Pfizer on charges of fraud and falsifying data on the dangerous side effects of the vaccine. Also, you may have watched a video of Hurricane Shaheen on the beaches of Oman filmed from the top of Burj Khalifa. Or scenes of some boys who gave their father a ride in the air by tying him with helium balloons and he got out of control… In fact, all these examples were fake news and just complete rumors. Unfortunately, they spread in the world like wildfire; people believed their content and circulated them on social media. Even many media outlets fell into the trap of this news without verifying its authenticity.

By checking, we defeat rumors

It is true that the public does not spread false news out of bad faith, but rather out of excessive concern. However, at certain times, the release of fake news is part of a widespread and systematic disinformation campaign, which has well-studied reasons and aims to incite panic in the hearts of its recipients, distort facts, obscure information, and preoccupy the public with trivial news to cover larger and more important issues.

From this standpoint, the importance of news verification comes as a basis for journalistic work, as fake news has already fueled the flames of mistrust towards media outlets around the world. And the journalist’s work became more difficult to control and refute rumors after their spread (the concept of debunkers). So today we are starting to hear about a new concept called pre-bunker, which means predicting that a rumor will happen with this topic and nip it in the bud.

In order to achieve the goal of reducing false news, humans have created advanced technological tools and programs based on accurate and intelligent algorithms, which help the journalist or ordinary person to know the origin of the news, the authenticity of the video, the extent of image falsification, and others. Many of these new technologies are based on the advantage of artificial intelligence and are used to combat misinformation. But despite their great usefulness, they may make matters worse, when they are used to produce false news.

What do we check on social media and why?

Nowadays, advanced technology has become available to everyone, especially smartphones, which are not limited to communication, but have become a tool for taking pictures and videos, editing them, cutting them, and adding effects. Spread, social networking sites have provided new platforms for publishing, enabling any citizen to become a journalist, social or political influencer.

Since the public is characterized by different levels of awareness and different abilities to differentiate between true and false news. It has become important to guide the interactors on how to check the news, information, or images that reach them through social media. Among the things that need to be checked are:

It is true that AI software is developing in detecting false news, but at the same time, it is developing in creating that false news. This type of software is not only capable of producing fake and misleading news, but some of them also have the ability to produce false videos or fabricated images in a very professional manner with a new technology called “deep fake” or “deep illusion”, which enables its user, for example, to put the face of a person on the body of another person and produces false evidence by image; even with sound.

Another example of the dangers of technology in expanding the circle of disinformation occurs in social media through fake bot accounts. For example, any time you log into Twitter and look at a popular post, you’re likely to find bot accounts. By clicking you can see that they’ve tweeted multiple times, often in a period of time. Their posts also happen to promote spam or spread digital viruses. Usually, the content of these posts is fake and may spread like wildfire because of these algorithms.

Because the margin of information and news on the Internet is so vast that humans alone cannot count them, artificial intelligence and machine learning, in particular, have become an essential part of the fight against disinformation and counterfeiting.

With artificial intelligence tools, the opportunity to alert the public about the most terrible lies poisoning the web has increased. This will be absolutely necessary to bring more truth to the ever-evolving Internet age.

AI-powered solutions may help protect classrooms, businesses, governments, and individuals from potentially harmful information. Many consider the ability of AI to combat fake news and other forms of misinformation to be our best resource, capabilities that humans simply don’t use.

In sum, given the amount of digital content created every day, the problem of fake news is extremely important. Fortunately, today, artificial intelligence (AI) applications to help detect and combat that news are growing. Among them:

It provides an app and website for users who want to know the credibility of certain stories. The Factual is powered by an algorithm that assesses the credibility of more than 10,000 news stories every day. Factors they consider include a site’s source history, author history, and the diversity of sources in a news article.The Factual Chrome extension rates news sites as you view them. The Factual website highlights the most credible articles on specific topics.

Free mobile app and browser extension. It provides fact and photo verification services. Also uses artificial intelligence as part of its automated search assistant feature. It also relies on fact-checkers to assist those who use the Service.

Its AI is designed to analyze claims, opinions, and events. The app monitors over a million web domains and social media platforms in real-time by using the information it gathers to assess the health of news on the web.

It is a media company that offers several verification tools. Including those that are automated through the use of artificial intelligence. It builds AI tools to help fact-checkers understand the most important and verifiable information.  Also aims to design an algorithm that can identify when someone intentionally repeats something they know is wrong.

A startup focused on deep learning, its algorithms focus on the unique patterns of how misinformation spreads online rather than how more factual stories spread.

It is an artificial intelligence model for detecting fake news, produced by researchers at the University of Washington. Grover has proven its ability to create fake content, which makes it effective in detecting AI-generated misinformation.

Sensity AI is a tool for spotting a relatively new frontier in fake information: deep fakes.

Artificial intelligence assesses and detects the severity of “visual threats”. Its detection apps combine video forensics and computer vision to determine whether images or videos are real or fake.

It is an online tool for instant fact-checking. Using the Google Fact-Check Explorer API, ClaimBuster allows users to validate their texts. It combines search results similar to their written claim along with determining the relative falsity of these statements.

It is an AI-powered service that detects fake ads and “inappropriate content”. Adverif.ai pairs its FakeRank algorithm with human reviewers to identify and notify users of potentially harmful content.

It uses artificial intelligence to provide actionable insights into disinformation and deep fakes. Alto Analyzer is an AI software that allows users to plan and compile digital conversations around specific topics. It can analyze online conversations in more than 50 languages, allowing the user to better understand where to target their ads or communications. Other tools like Alto Insights use machine learning to deliver visual data reports.