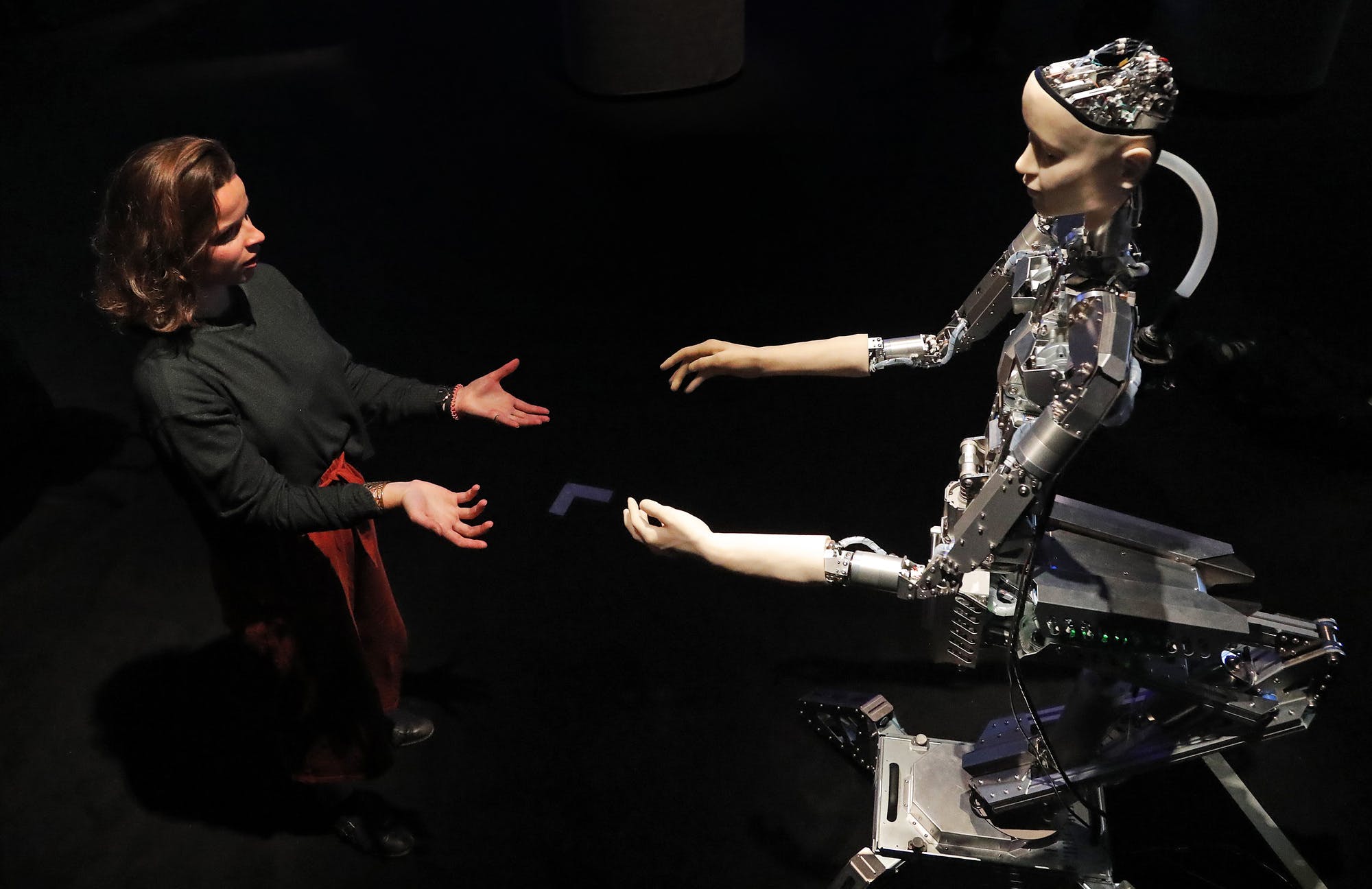 In practice, only a relatively small proportion of what is displayed falls directly into the category that we usually think of as art, but there’s a lot of other interesting stuff there to look at and think about.

artificial intelligence in the visual arts

The show begins with the idea of the Golem – the non-human monster who surfaces first in European Jewish folklore, and which manifests itself again as the monster in Mary Shelley’s Gothic novel Frankenstein.

Yes, I do know that the second part of this description rather neatly describes what one now finds in contemporary art. Ranging in this case from Damien Hirst’s dead shark in a tank to the sunken-and-raised-again refugee ship once jammed with dead bodies, that has been given a starring role in the current Venice Biennale. Not to mention a whole series of screaming popes by the late Francis Bacon. All these, however, are the products of human imagination and direct human agency.

What the exhibition kicks off with is a display of teeny-weeny Golem toys, too small to scare even the most neurotic toddler.

From this, it pursues a wandering path from Egyptian mummy masks to board games, Go in particular, where computer programmes have recently out-foxed even the most skillful human competitor. ‘Go,’ as the exhibition catalog informs one, ‘is one of the most complex games ever devised, with more possible board configurations than atoms in the universe. In 2016 the computer program Alpha Go beat a top human player by four games to one.

From there it moves into the world of the code-breaker Alan Turing, then comforts one with a harming robot puppy, playing with a ball.

Comfort, in this case, doesn’t last for long. ‘Today,’ we are told Artificial Intelligence is all around us, shaping our lives in public and private space, through the media we consume ad the products we buy.’ The Golem, it seems, has gone to ground, and prefers not to advertise its existence too publicly or insistently.

Only now and then, in this later part of the main presentation, does one meet anything like a robot. What you encounter instead is an example of the way that AI is being used for radical interventions in nature. For example, a purely synthetic apiary, operating without bees.

At the end of this series of presentations, you leave the Curve, and descend to a magical realm in the Barbican’s second basement – that is to say, to the very deepest space in this vast complex. Here you will find yourself enclosed in an installation entitled What a Loving and Beautiful World. Butterflies flitter through trees.

Chinese characters (in fact Japanese, since this is a Japanese production) loom up and disappear. You soon learn that everything you see around you moves in response to your shadow, your gestures, and to the shadows and gestures of those who happen to be there with you in the space.

The spectacle offered is breathtaking, in an exotic oriental way. At first, I felt I had become part of an alien cosmos, Then, alas, after fifteen minutes of playing with shadows, I started to feel claustrophobic. It all seemed like a good metaphor, suitably sweetened, for what AI with no pretense to being art was already doing in the outside world. You think you can grasp the changes, and you can’t.

What is the Artificial Intelligence (AI) Journalism?

Microsoft and the NBA will create ‘virtual...

Amazon to invest $10 billion in Space-Based...