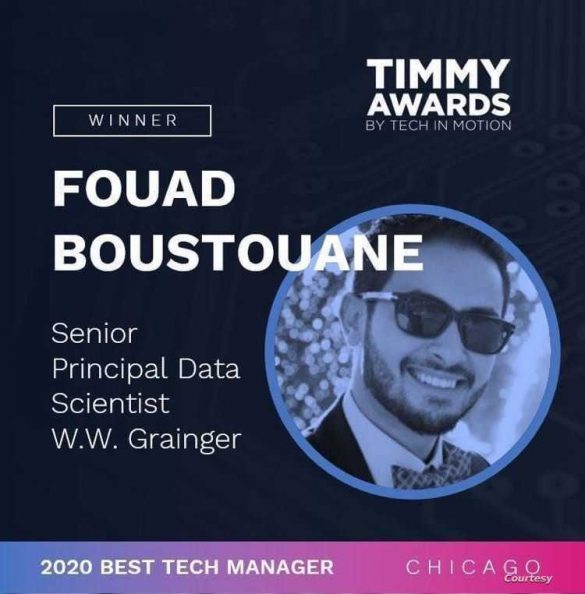 UAE-based the Artificial Intelligence Journalism for Research and Forecasting (AIJRF) has announced that Dr. Fouad Bousetouane the American-Algerian Data Scientist has joined the AIJRF Advisory Board, Dr. Bousetouane the head of the AI & innovation team at W.W. Grainger, USA .

He added that: ” We will be mainly working on developing cutting-edge AI-powered tools and platforms to solve a wide spectrum of problems related to journalism e.g, automated content generation, AI-assisted Arabic language writing, fake news detection, news summarization, etc. We believe that this initiative will take journalism to the next level, especially in the Arabic world.”

Prof. Mohamed Abdulzaher, pioneer of Artificial Intelligence Journalism and CEO of AIJRF said: “ “Today, AIJRF Advisory Board is honored to have such a great talent like Dr. Bousetouane, who has  significant experiences inartificial intelligence technologies manufacturing in both hard and software, which is the core mission of the AIJRF  to engage all practical and scientific experiences in one platform .

Dr. Abdulzaher added that: ”  Dr. Bousetouane  is a great asset to AIJRF and the Advisory Board, he has a unique talent in creating  Arabic content using the new AI tools and applications, which is what we aim to achieve in the coming period, especially through the Artificial Intelligence Journalism World Forum.”

Dr. Fouad Bousetouane is an incredible example of an aspiring Algerian-American researcher that has reached global prominence. He was recently chosen from over 500 nominees across North America to receive the prize and title of Best Executive Director for Research in Artificial Intelligence and Complex Technologies in the United States.

Dr. Fouad owns more than 10 patents and has published over 40 scientific research papers in well-known journals.

Dr. Fouad Bousetouane is a Senior Principal Data Scientist and the Lead of the AI & innovation team at W.W. Grainger  USA  since 2016. He is also a Chief Scientific Officer and Advisor of multiple emerging  U.S startups in the fields of AI and data science, and the co-host of the largest Amazone AWS SageMaker and AI Eco-systems meetup series in Chicagoland, USA. Dr. Fouad received the prestigious 2020 Timmy-Award as ‘Best-tech-Manager’ in Chicagoland, organized by the American national organization Tech-in-Motion.

Artificial Intelligence Journalism World Forum (AIJWF) is the first global platform to bring together academics, media professionals and specialists in AI technologies from educational institutions, universities and the media.

AIJWF managed by the Artificial Intelligence Journalism for Research and Forecasting (AIJRF), the UAE-based world’s leading platform in designing the future of media and touching human lives.

AIJWF hosts an annual specialized academic event, where it brings together companies, institutions, media industry leaders and technologies of the Fourth and Fifth Industrial Revolutions.

The Global Artificial Intelligence Journalism Index‎ (GAIJI) measures the efficient utilization and dependence of AI Journalism technologies and tools in the media. On an annual basis, the index will be interviewing 100+ media companies across six main key indicators.

Artificial Intelligence Journalism for Research and Forecasting (AIJRF) is a Think Tank established in the United Arab Emirates in 2018, by a group of professors and researchers specializing in artificial intelligence (AI) and the future of Humans 2050, and the Fourth and Fifth Industrial Revolutions.

Artificial Intelligence Journalism for Research and Forecasting (AIJRF), we forecast future of Humans 2050, particularly in light of the technological advances and artificial intelligence technologies in various fields: Media and Entertainment, Information and Communications Technology, Culture, Healthcare, Education, Economic, Sustainable Development Goals, and designing the future of Smart and Sustainable Cities.

AIJRF is a leading global organization in the research, forecasting and shaping of the future of AI and the Fourth and Fifth Industrial Revolutions.

AIJRF believes that every new development in AI can have positive effects on the future of the world, and aims to forecast the new media landscape that will be the result of the Fourth and Fifth Industrial Revolutions.

AIJRF has advanced skills in training, teaching, searching and forecasting through the AIJRF Advisory Board, plus specialist Academic, Editorial and Media teams. It works in co-operation with various research institutions and universities, and specialised groups of academics and researchers in the United States, Europe, Asia and the Middle East. Its teams speak and edit in five different languages: Arabic, English, French, Italian and Spanish.

Human Vs Machine: 11 Tally Robots to Be Employed in UAE Stores