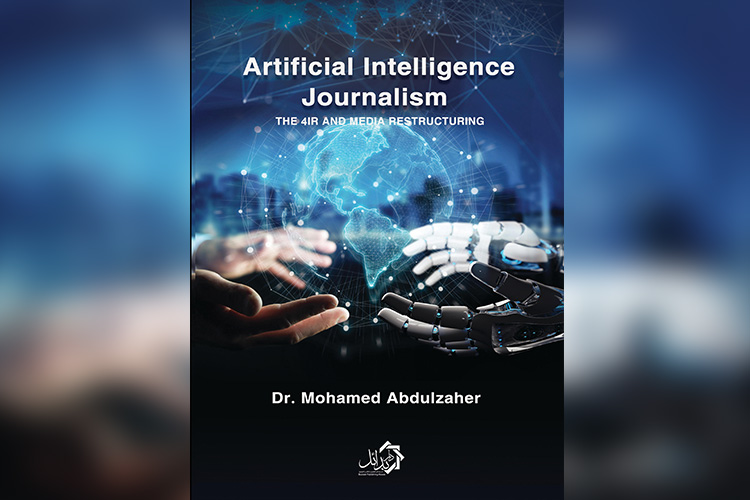 Abdulzaher says that the world has been talking about Robot and Journalism for more than two years and how it can positively influence the media industry, where thousands of “robots” can be employed in editing and filming, as well as in broadcasting.

“But for me when I began to coin the Artificial Intelligence Journalism concept, I found that the concept is a huge and complicated than merely relying on a “Robot” in the news industry”, Abdulzaher says in his first AI Journalism book

“AI Journalism” is another new term that has not been used before, and it will replace citizen journalism and coincide with the techniques of 4IR, where the media will seek to use the techniques of AI and 4IR to the fullest in terms of: relying on the latest satellites that penetrate the Internet speed to beyond 1000 MB

And the use of 3D cameras in a superior, clearer and more comprehensive way than the naked eye, alongside thousands of robots covering events in the most dangerous places, such as war zones, fires, seabed, in space, and above the skyscrapers. This is the AI Journalism era.

In first AI Journalism and Media Restructuring book which published in cooperation with the Badael Publishing House in Egypt and Artificial Intelligence Journalism for Research and Forecasting in UAE,, Abdulzaher says that news broadcasting is completely managed without human intervention except behind the scene.

The robot conducts the event, which is filmed using the latest video and audio transmission technology, The robot argues in the studio, presents and analyses, writes news headlines on the screens, and even comments as an interpreter to guests in different languages.

It does not matter the time of the programme, while another robot chooses the last musical intervals very carefully, Rarely can you find human on the screen except for limited tasks, and as guest of honour amidst a number of robots.

Live reports will be broadcasted by the “anti-inflammable” flying robot directly from California’s forest fires, and from the bottom of an ocean where cleaning works are ongoing on thousands of tons of plastic waste.

“AI Journalism” as the author says, will create a new revolution in the media industry, where there are no geographic or legal borders, no restrictions imposed by governments on the freedom of News broadcasting and to access to information.

Competition will be very strong, the winner of the race will be the one who gets those opportunities, and has the latest modern technologies, and can integrate them into the media industry, but unfortunately the third world countries will become a market penetrated by all these channels using modern technologies to spread the information by the media and “AI Journalism”.

Robots will be Ready at any Time to Reach Anywhere

In “AI Journalism” there is no room for suppressing the revolutions by peoples, or hide disasters and accidents in some countries. There will be satellites, and media’s legions of “robots” that will be ready at any time to reach anywhere.

“AI Journalism” will be dozens of times faster than social media and will be more accurate, more detailed in covering the events.

It’s obvious now what the term AI Journalism means. It complements the development of the media industry since the era of the First Industrial Revolution, and then the great progress in the media industry with the Third Industrial Revolution, relying on the computer and the internet, and the subsequent emergence of the citizen’s press, where everyone has the ability to broadcast, stream and Live News at the time it occurs.